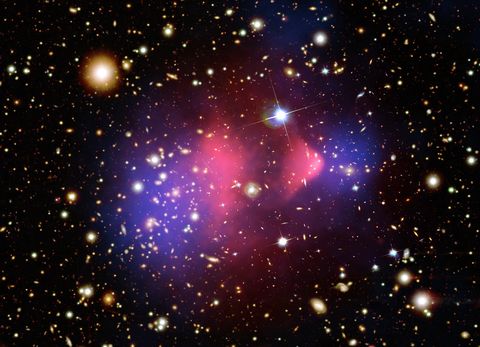 For something that’s literally as old as the universe, dark matter doesn’t get much attention outside scientific circles. Maybe that’s because, other than a short-lived SyFy series and a late-period Randy Newman album, this nebulous star stuff has had a tough time breaking through the pop-culture barrier.

But the truth is that dark matter has never mattered more. Our own Milky Way is embedded in a massive cloud of it, we’re looking for its interactions deep inside Earth, and there are whole galaxies without it.

So what is dark matter, anyway? Why can’t scientists get enough of the stuff, even though they can’t actually find it? What deep, dark secrets does it hold? And could it ultimately shape the future of life as we know it?

Why Is Dark Matter a Mystery?

The XENON1T experiment is deep underground to avoid the effects of electromagnetic radiation.
Courtesy: XENON1T

The history of dark matter shows just how elusive this star stuff can be.

Physicists first theorized the existence of dark matter in 1933, partly because equations showed that there wasn’t enough observable matter in galaxies to keep them from disintegrating. That, and observed rotational speeds of galaxies didn’t fit the expected results from standard physics models.

Further research largely waited until the 1970s, when better scientific instruments, from receivers to gamma radiation-detecting space telescopes, let astronomers and physicists confirm the earlier calculations and observations. Powerful radio telescopes also offered clues like gravitational lensing (where matter causes light to bend between its source and the observer) and strongly suggested that there was a kind of matter out there we could detect, but not see.

“Everything you can see, everything you feel, everything you’re made up of, only makes up 5 percent of the universe, and the rest is this dark stuff … and we have no idea what it is,” says Rebecca Leane, a theoretical physicist at MIT. Leane’s Ph.D. dissertation was on the phenomenology of dark matter.

Physicists estimate some 27 percent of the total universe is dark matter and the rest (68 percent) is a similarly shadowy phenomenon called dark energy. What makes dark matter so mysterious?

“The big thing about it is that we can’t see it; it doesn’t interact with light,” says Ethan Brown, an Assistant Professor of Physics at Rensselaer Polytechnic Institute. (The photo at the top of this article is a composite image from optical and x-ray telescopes where the blue shading depicts the likely dark matter, even though it doesn’t show up directly in the images.)

Broadly, we can measure matter and energy in the universe by observing it in one of four interactions:

Dark matter eludes most of those observations because it doesn’t appear to interact with standard matter at all, except through gravity. But that hasn’t stopped physicists from ruling out other methods.

One of Brown’s areas of study is trying to capture dark matter interactions with normal matter in the form of liquid xenon isotopes. Xenon-124 has a half life roughly a trillion times longer than the age of the universe. Massive vats of the stuff are tucked deep into boreholes in Earth’s crust to limit background noise like electromagnetic radiation that could interfere with measurements. Only dark matter and certain subatomic particles like muons and neutrinos can pass through the thousands of feet of dense rock.

This hallway leads to the Jadugoda Underground Science Laboratory in India. Located 1,820 feet below the surface, this lab will search for Weakly Interacting Massive Particles (WIMPS), which point to the existence of dark matter.
Pallava BaglaGetty Images

So it’s a very “quiet” room, where—theoretically—only Xenon-124’s exceptionally slow natural radioactive decay, or interactions with muons, neutrinos, or dark matter could cause some kind of change in the isotope. If a subatomic particle of dark matter knocks out an electron from the Xenon-124, the thinking goes, the Xenon1T experiment will see it.

While dark matter scientists haven’t actually detected direct interactions with the elusive subatomic particles yet, they’ve certainly made some other interesting observations—including the decay of xenon-124, only the rarest event ever recorded in human history.

So What Is Dark Matter?

We know more about what dark matter isn’t than what it is. For starters, it isn’t dark energy. That’s some kind of energy for which the evidence is also indirect, but likely exists because the universe is expanding at an increasing rate, which defies the laws of physics of normal matter and energy.

And dark matter isn’t antimatter, either, which is normal matter composed of subatomic particles that have an exact opposite charge to matter. When antimatter and matter collide, the annihilation produces bursts of gamma rays. Dark matter can also produce gamma rays when it and its counterpart, dark antimatter, collide to produce standard matter.

And finally, dark matter isn’t just a different class of the three families of ordinary matter like hadrons, leptons, or bosons, the latter two of which were formerly theoretical, but have finally been directly observed in particle accelerators and don’t behave like we expect.

🤯 More Mind-Blowing Stories
New Particle Could Be Portal to Fifth Dimension
How Many Galaxies Are There in the Universe?
You Can't Be Sure This Story Exists. Here's Why.

Leptons and bosons do give us a hint to follow, however. Dark matter appears to be a form of matter made up of an entirely different class or classes of subatomic particle. One of the most promising is called a WIMP: a weakly interacting massive particle.

WIMPs, despite their puny name, are thought to have a mass 1,000 times greater than standard matter’s protons. And the way that WIMPs are theorized to work fits neatly with calculations of how much dark matter there must be in the universe, says Leane. This is called the WIMP Miracle.

Then there are theorized particles like SIMPs and axions—and countless other potential clues. “There are more theories out there now than I’ll ever understand,” Brown admits.

Naturally, it can be pretty annoying to do research when you can’t actually observe something you think exists, or isn’t always there. Researchers at Yale, for example, have found two galaxies that don’t have any dark matter at all.

“It’s hard to point out just one solution for how these might have formed,” says Shany Danieli, a doctoral student at Yale who co-authored two of the studies. “At the beginning, we thought maybe it was just some kind of anomaly, but now we found a second galaxy.”

The multi-lens Dragonfly Telephoto Array is used to look for ultra-diffuse galaxies, which may be largely made up of dark matter.
Courtesy Pieter van Dokkum / Yale University

The research points to some fascinating possibilities for how dark matter functions in the universe: that dark matter interacts with normal matter via a mechanism that we don’t yet know—a so-called “dark force,” or fifth force in the universe.

Another idea is that dark matter does interact via more of the known forces than just gravity, but does so at such a tiny interaction strength that we simply don’t have the means yet to reliably detect the signals.

In other words, the science is far from conclusive.

Why, then, are physicists so focused on unraveling the mystery of dark matter?

“The work of particle physics the past 50 years has been to break down the universe to its smallest components,” says RPI’s Brown.

“When we understand what dark matter is, and how it behaves, that’s a huge step to understand the fundamental underpinnings of the universe,” Brown says. “We can answer questions like how did the universe develop to what it is today?”

Plus, fundamental particle physics, including the search for dark matter, has already produced real technological gains. Many of the detection tools used in the field are highly applicable to other areas like medical imaging or nuclear security.

The Science Continues
The Eternal Quest for Aether, Which Never Existed
The Weird Galaxy With No Dark Matter

Leane points out that the internet was created in part because particle physicists at CERN wanted to find new ways to share data with each other. GPS, meanwhile, relies in some measure on Einstein’s theory of general relativity, which explains how gravity curves space and time, says Danieli.

We can’t begin to know what might emerge from our study of dark matter, but consider an analogue from the study of conventional matter, which yielded the most fundamental technology that allows us to do practically anything in modern life. Without J.J. Thomson’s discovery of the electron in 1897, we wouldn’t even have electricity, much less computers and an internet powered by it.

So while we still don’t know much about dark matter today, it could very well change the way we live tomorrow.

This content is created and maintained by a third party, and imported onto this page to help users provide their email addresses. You may be able to find more information about this and similar content at piano.io
Advertisement - Continue Reading Below
More From Pop Mech Pro
How to Rotate Your Tires
How to Paint Kitchen Cabinets
Advertisement - Continue Reading Below
Tested: Black+Decker Kitchen Multitool
Cut Nails: Old-Timey Fasteners, Still Useful Today
How to Use Drywall Anchors
How to Get Your Wood Trim Joints Just Right
One Charge In Ford’s F-150 Lightning
Pushing Ford F-150 Lightning’s Mobile Generator
Create a Backyard Oasis With a DIY Stock Tank Pool
Engineering The Toyota GR Corolla For Drift Racing